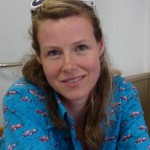 British filmmaker Katy Milner has been named the inaugural winner of the KODAK High Falls Vision Award, which honors and supports women filmmakers. Milner earned an in-kind grant of motion-picture film from Kodak valued at $2,000, to be utilized for her autobiographical short “Graffiti.” The announcement was made today in honor of International Women’s Day to celebrate the High Falls Film Festival mission and Kodak’s commitment to supporting the achievement of women in the industry.

Milner entered this new contest for women filmmakers in the fall, when it was launched during the run of 2015 High Falls Film Festival, supporting a treatment for her upcoming film. Kodak was a founding sponsor of the festival in 2001 and has partnered with the festival to present this new Vision Award. Milner may now choose from KODAK 35mm, 16mm, or Super 8 film to make her movie.

“The KODAK High Falls Vision Award was inspired by George Eastman’s powerful legacy of philanthropic giving and Kodak’s ongoing commitment to supporting female filmmakers,” said Sascha Rice, Global Marketing Director, Entertainment Imaging, Eastman Kodak Company. “We are thrilled to be partnering with Rochester’s High Falls Film Festival on this award. We are proud of our film heritage, honored to support the local community, and excited to shine a light on the next generation of female filmmakers.”

It is estimated that only 17 percent of all filmmakers and artists working behind the camera today are women, and that fact has been a driving force behind the festival since its inception. “As one of the oldest and most important women’s film festivals in the world, High Falls does Rochester’s legacy in film and women’s rights quite proud, as we celebrate the best contemporary work from around the world,” said Nora Brown, Executive Director of High Falls Film Festival, who is also a filmmaker and the Rochester/Finger Lakes Film Commissioner. “With Kodak’s help we are fortunate to be able to recognize, support, and celebrate women filmmakers.”